Called to Care for the Earth – Retrace the Footprints of Christ

Called to Care for the Earth: Come Follow in the Footprints of Jesus!

The deepest and life-long desire of Francis of Assisi, was to “follow in the footprints of Jesus.”

In 1979 Pope Paul VI proclaimed St. Francis of Assis the Patron Saint of Ecology. But the youthful Francis was far from holy! He was a carousing spoiled brat of an up-and-coming cloth merchant, who went off to war as a knight in the Crusades hoping to gain fame and fortune!

But he soon discovered that nothing of that lifestyle met his deepest heart’s desire. It was only after Giovanni Francesco di Bernardone embraced a leper and did a 360-degree about-face that he found what he was looking for.

Joining his poetic intuition, his appreciation of the beauty of the natural world, with God’s grace, Giovanni became St. Francis of Assisi. Only when “following in the footprints of Jesus” was Francis able to see all of creation as his “sisters & brothers.”

Today, it is Franciscan spirituality, ethics, and theology that lies at the heart of Pope Francis’ teaching – Laudato Si – On Care for Our Common Home. Exploring St. Francis’ journey “in the footprints” will help us in shape our “ecological footprint” today.

Discover how St. Francis’ example can show us the way to care for the planet-sized issues of human caused global warming; scarcity of potable water; lack of access to sufficient food; and our unsustainable energy supply.

Join us for one, or all:

September 23 Called to Care for the Earth: Retrace the Footprints of Christ

September 30 Laudato Si’ and Me

October 14 The Mission to Care for Our Common Home

A Ministry of the Sisters of Mercy 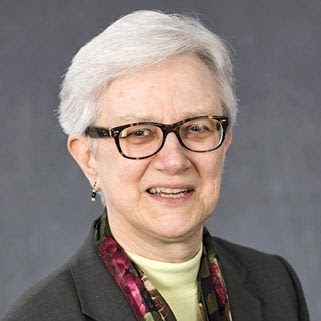 Sr. Dawn is a Rochester, Minnesota Franciscan. The mandate of the John Family Chair, is to promote the Roman Catholic Consistent Ethic of Life, advanced by Cardinal Bernardin, thus, her research and teaching addresses a variety of issues. Her primary focus is environmental ethics through the lens of Franciscan theology, especially the effects of global climate change on poor people. Equal concerns include the religion/science dialogue, the ethics of power and racial justice, and fundamental moral theology.

In 2017 Sr. Dawn received the Franciscan Federation’s “Inspiration for the 21st Century Award” for her contribution to Franciscan theological education. She is a leading Catholic environmental ethicist, and in 2012 was acknowledged among the top twenty-five eco-theologians in The U.S. Heartland by The National Council of Churches of Christ Ecojustice Programs. Since 2015 she has served on the Encyclical Working Group of the Office of Human Dignity of the Archdiocese of Chicago, whose mission is the education and implementation of Laudato Si’.

Please confirm you want to block this member.

You will no longer be able to:

Please note: This action will also remove this member from your connections and send a report to the site admin. Please allow a few minutes for this process to complete.

You have already reported this